Former Taiwanese President Lee Tenghui issued a prayer for the 25th Commencement of the June 4Tiananmen Square Massacre, becoming a powerhouse for mobilizing support for the global prayer on the eve of China’s historic 1989 event.

In his prayer, President Lee recognized history’s condemnation of China’s “violent crackdown of the people’s efforts for democracy and freedom” 25 years ago, observing that such condemnation “has never been changed since, in the past quarter century.”

Emphasizing the power of faith, President Lee called on the Chinese people to pursue such faith with human rights and universal values. “Only based on this foundation can China see a fundamental change from authoritarianism to democracy,” he said. “The nature and democratization of future China depends on the faith and ideals of the people who are in power and on grassroots in pursuit of democratization.”

The president expressed his intent to pray on June 4 for the Chinese people in their continued fight for democracy and freedom. Professing a “deep love for Taiwan”, President Lee called on the Taiwanese people to join him in prayer for China, “in hope for a democratic and free country, freedom from its old dynastic traditions, and for its people to live a democratic and free life.”

President Lee was once dubbed “Mr. Democracy” by the global community because of his extraordinary contributions to the “Quiet Revolution” that transformed Taiwan in the 1990′s. The democratization of Taiwan bears a special weight in terms of international democracy building. Taiwan’s success in achieving democracy implies a great deal to China’s mainland, as both sides share the same Chinese civilization. With nearly a quarter of the world’s population, China’s democratization will bear an enormous influence on the global progression of peace and civilization of all human beings.

A few weeks ago, President Lee had a meeting in Taiwan with participants of the 9th Interfaith/Interethnic Leadership Conference, including Initiatives for China (aka Citizen Power for China). There, the president said that China’s democratization is among the greatest wishes of his life. In pursuing his democratic vision, the 92-year old Mr. Democracy has worked for the future of Taiwan, the well-being of the Chinese people, and all of modern civilization. President Lee is an inspiration and a powerhouse for Chinese democratization, and is a noble example of Taiwanese politicians who fight fearlessly for universal values and their principles, with deep love for Taiwan. 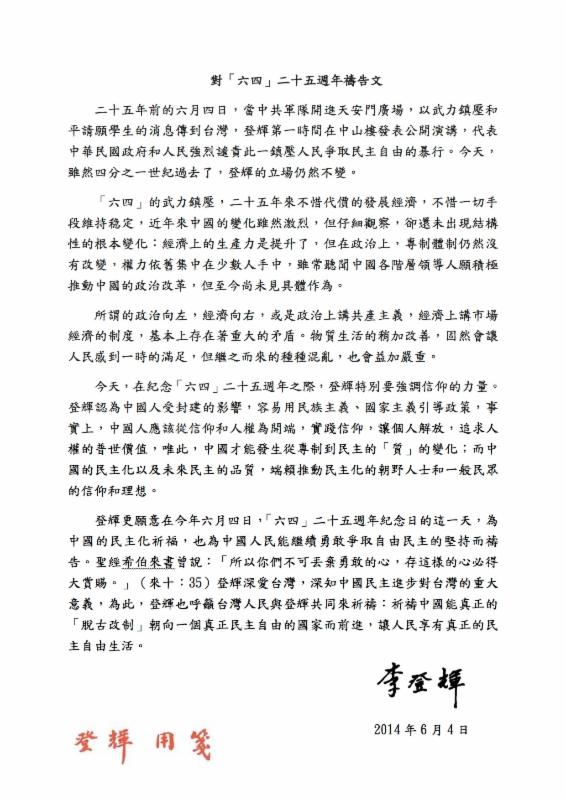 A Bidding Prayer for the People and Leaders of China
http://www.initiativesforchina.org/?p=1696

After each petition let the people of each religious tradition respond in the way of prayer appropriate for them.

Let us give thanks for the beauty of the earth.

Seen from space it is a delicate blue and white ball;

Seen up close it teems with life in uncountable variation of color and shape.

Pray that all of us would work to protect the earth and all its beauty.

ALL: Give thanks and pray for the earth.

Let us give thanks for the nations and all peoples, for their rich diversity of color and shape and language, of custom and culture, for their songs, their dances, their art of all kinds.

All: Give thanks and pray for the nations and their peoples.

Let us give thanks for China, for its immense history, its vast cultural riches, its breathtaking achievements from ancient days to the present, its wondrous diversity of people.

All: Give thanks for China.

Let us pray for the people of China, undergoing centuries of change in mere decades, a people whose hope is being unlocked as young and old dream dreams and have visions of a future of happiness and fulfillment.

All: Pray for the Chinese people in their hopes.

Let us pray for the leaders of China, from the smallest village and town to the great cities, from the inland to the coast, from the mountains and deserts to the urban rivers of concrete and cars. Let us remember the leaders in the government who bear heavy responsibility for a land with more than 1 billion people.

Pray for those of China’s leaders who must tend the society and economy that they would always keep in mind the poor and vulnerable, the children, the elderly, the ill, and those not in favor or despised. Pray thatChina’s leaders would strive to create a China where all live in dignity, enjoying the essential rights that make and keep human life human: the right to think, speak, and associate freely, the right to practice religious faith without hindrance, the right to seek economic opportunity without prejudice or payoffs, the right to be free of arbitrary arrest and confiscation of land, goods, and personal property.

All: Let us pray for the leaders of China.

Pray especially for China’s national leaders who must guide a great nation as it emerges into world prominence and takes its place of shared leadership with the great powers of earth. Strengthen the hands of those who would work to increase the bonds of international friendship and cooperation that prosperity would be governed by justice and the desire for peace.

All: Let us pray that they may be guided by wisdom, justice, and the desire for peace with all peoples.

Let us give thanks for the courage of the young people of Tiananmen Square who 25 years ago showed the world that the Chinese people desire freedom and justice above all earthly goods, and who were willing to give their lives in their brave witness. May all be strengthened by their bravery. May all be blessed by their memory.

All: Let us remember with gratitude the martyrs of Tiananmen Square.

In this anniversary of China’s young martyrs let us pray that the Chinese leaders of today would turn their hearts away from fear and defensiveness, that they would reach out to the victims and victims’ families, and repent of the massacre of China’s youth. May repentance be the first step toward reconciliation and be a promise to history to never again turn on their own people in murder.

All: Let us pray for repentance and reconciliation

Let us remember all other victims of cruel tyranny who have suffered jail, beatings, despoliation and theft of homes, property, livelihood and good names and reputation in all the regions of China and all its great and growing cities.

All: Let us remember all victims of injustice who suffer at the hands of the powerful.

Let us all bless China and its people and leaders that they would find new resolve to bind up old wounds and dedicate themselves to a future of justice, harmony, and peace.

May each of us from our many national, cultural, and especially religious traditions take increased devotion to the cause for which the Tiananmen martyrs gave their lives and pledge to each other our commitment unflagging service to their memory and to the cause of justice, freedom, and human dignity that inspired them.

In the minute of silence that follows these words may each of us reach into our own hearts and the hearts of our religious faiths, and adding our own concerns – some too deep for words – and breathe that prayerthat is capable of moving mountains.

(Silence for one minute)